Borderlands 3 Gets A Cake For Its Second Anniversary, And That's No Lie 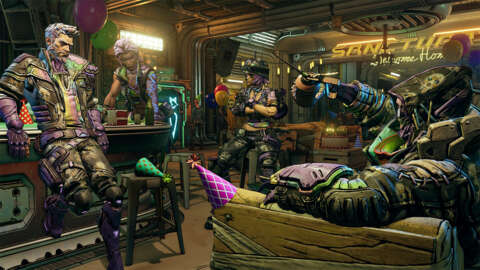 The two events are Loot Monster Mayhem and Freebies at Maurice’s Black Market, both of which are live now, ending September 15 at 8:59 AM PT / 11:59 AM ET. The Loot Monster Mayhem event increases the spawn rate of loot variant enemies, which drop extra goodies. Players will also be able to seek out Maurice’s Black Market vending machine during the event, which will be offering free loot. Maurice’s vending machine spawns in a different non-DLC location every week, so players will need to hunt it down.

Gearbox is also offering up two special shift codes during the event. The first one unlocks three cosmetic items, the ice cream cake colored Popsychle Vault Hunter skin, the Pain Freeze weapon trinket, and Field Trip Echo Device skin. The second shift code gives players a diamond key, which gives access to the Diamond Armory, where players will get four items, one of which is guaranteed to be Legendary. Shift codes can be redeemed in the in-game social menu or on Gearbox’s shift code website.