The Best BAD CHOICES – The Have You Ever? Game + The After Dark Edition 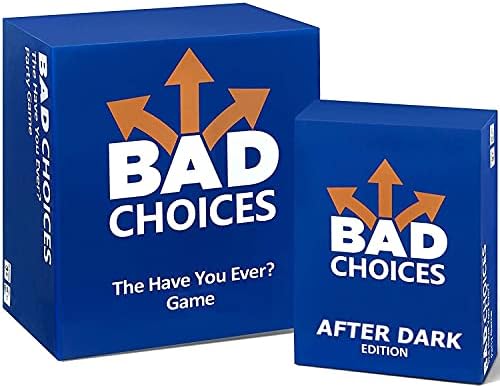 BAD CHOICES After Dark is the hilarious game that’s the combo of ‘Never Have I Ever’ and ‘UNO’ and the rules are really simple. This is the game for finding out hilarious truths, secrets and stories about your friends. The best stories come from our Bad Choices! Invite your worst friends over, leave your feelings at the door, and die laughing over the craziest things you’ve all done. How To Play: Each player is dealt 6 cards. When it’s your turn, choose one of your question cards, then ask it to the player you think is most likely to answer ‘YES’ to it. If they say ‘YES’, you get to discard your card. If they say ‘NO’ you have to keep the card and try to use it again later. Answers can ONLY be ‘YES’ or ‘NO’ and each player must answer honestly. With Skip Cards, Draw +1, Draw +2, and ALL PLAY cards, there’s a surprising amount of strategy that makes Bad Choices SO MUCH FUN to play. The player to discard all of their cards first becomes the winner. Game Contents: 400 Hilarious Cards
1 Instruction Booklet
3 Epic Game Variants

HILARIOUS GAME: Bad Choices is the combo of ‘Never Have I Ever’ and ‘UNO’. This is the game for finding out hilarious truths, secrets and stories about your friends
EASY TO LEARN RULES: 400 Hilarious Cards that will have everyone laughing. Created by the creator of the game BAD PEOPLE
QUESTIONS = 400 Check out some examples in our images
PERFECT FOR PARTIES AND GAMES NIGHT: Awesome board game to play with friends, games night, at a party, office party, dinner parties etc.
CALLING YOUR FRIENDS OUT IS HILARIOUS AND YOU CAN PLAY BAD CHOICES 1000’s OF TIMES: The gameplay changes each time based on who you are playing with. Ages: 15+, Time: 20-45 Minutes, Players: 3+